How did NASA just fly a helicopter on Mars? 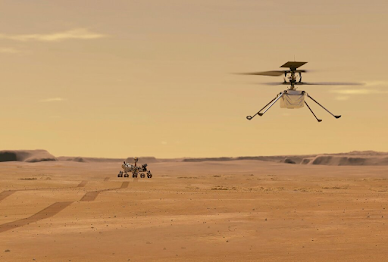 NASA Literally just flew a helicopter on Mars, but how? Many people on Twitter were suggesting it was fake since there are no helicopter pilots on mars. Obviously, everyone laughed at them, and they were wrong. This helicopter, more like a drone, was not manually flown/controlled due to obvious reasons & a time delay from radio waves from us to Mars. It was powered by its onboard computer and gets electricity from its solar panels. This helicopter is called ingenuity.
It was launched last year on ULA'S Atlas V Rocket along with the Perseverance Rover, which you can see in the background of the image above on the left side. Ingenuity wasn't easy to make & have fly. It's rotors/blades are made from carbon fiber, a high strength but extremely light material, also used in the aerospace industry on almost any rocket for COPV's, or composite overwrapped pressure vessels.
Ingenuity needed to be very lightweight since Mars' atmospheric pressure is way below 0.1 bar/atm (0.1% of Earth's atmospheric pressure). This means there would be way less air to suck in through the top and push down. This would also be more difficult because Mars' Atmosphere, as little as it is, consists of almost entirely Co2, aka Carbon Dioxide. Carbon Dioxide is denser than Nitrogen, which is more than 70% of the air we breathe & is all around us.
Ingenuity successfully & autonomously lifted off this morning at 3AM, and landed. We didn't get the info back that it had lifted off and landed until around 6AM because of the radio wave time delay. This is where laser communications come in. More on that in our next blog post. Thanks for reading.