Why flying cars are a bad idea. 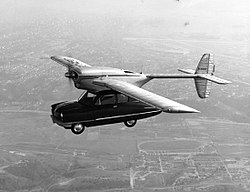 Flying cars, a concept dating back to the year 1917. Flying cars were often thought to be a great idea, dividing the traffic between the on ground roads and "skyways" aka roads in the sky. And yes, this indeed would seem like an amazing idea. There are a lot of risks involved with flying cars and problems.

Starting with risk of failure. Mid-flight, what if a turbine fails? What turbine? Yes, in order to stay hovering you need to react against air, whether that is a turbine, multiple turbines, air blowers, and more. What if just ONE of those (lets say 4) turbines fail? You are likely dead, as the thrust will not be balanced, and due to lack of control authority, your hovering car would flip out. If all turbines fail, you drop to the ground and slam into it, causing either an explosion or death.

Another issue is, power. It takes a lot of electricity to stay hovering in the air for a while and keep moving for hours without needing to recharge/refuel, like a conventional car. You can't use solar panels/solar cells due to lack of surface area; and you barely get any electricity. You can't use nuclear energy, for an obvious reason (you don't want a radioscopic thermoelectric generator aka RTG or something similar literally in your car, especially with humans).

Another issue, what if there is an accident mid air? Then there could be an massive fire from all those batteries holding the energy necessary to keep those turbines spinning fast. This also creates VERY loud noise. You will hear these huge loud turbines from these hundreds of cars mid air from a mile away, probably even more.

Why turbines though? It is probably the most efficient way of making cars fly, other than magnets which are not electric, but those get weaker over time and you don't really want a gigantic magnet in the ground. Your phone and/or other devices would fly right out of your pocket and smash into the ground where the giant magnet is.

The conclusion is; flying cars are not good ideas, and better + faster ways of transportation are coming soon & fast, like supersonic pods moving through tunnels, rockets that can get you anywhere on earth in under an hour, usually under 30 minutes, and more.