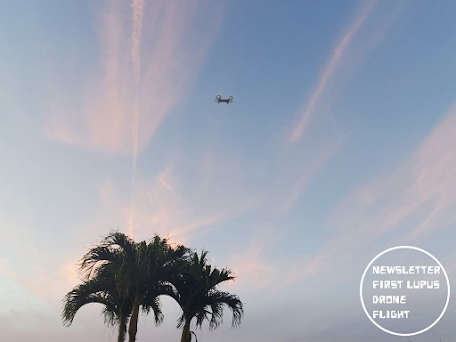 Today, we at Swivro conducted several tests of our solar-powered autonomous Lupus Drones, designed to fly up to high altitudes, provide internet, communications, high-resolution imaging, 24/7 live video, temperature & atmosphere monitoring, and more. We conducted a total of 3 flights today with this Lupus Drone. One very short hop, one 50ft hop, and one 150ft hop. All of these hops gave us data about aerodynamics with the drone, throttle capability, and more. The drone can throttle from about 10%-100% throttle and can move on its X-axis by individually throttling the 4 rotors.

This first Lupus Drone does not (yet) feature any solar panels, as it is the first Lupus drone. During these test flights, we also tested imaging, with the onboard HD Camera. The ascent for these 3 test flights was manually controlled, the hover & altitude hold was autonomous, and the landing was also autonomous, all via the onboard computer. Different tasks can be initiated on the ground via a program and/or buttons. Unfortunately, we decided not to publicize the images transmitted via the air from the drones onboard camera, but we did record 2 videos of the drone autonomously hovering & landing. There is still more data to collect and more configurations to fine-tune, so these 2 flights recorded were not the stable-est of flights.

The landing on the first video was not visible, but you could hear touchdown the drone touching down, then shortly after, the rotors throttling down then completely shutting down. And, as you saw at the top of this post, the final image, taken in high resolution of the drone hovering autonomously. The Lupus Drone is meant to be as small & as lightweight as possible, which is why we have opted for a very small design. The battery will be recharged via the onboard solar cells on the top of the drone.
The Mars Variant of this drone will not be able to hover for very long periods of time, like on Earth, because on Mars the rotors will have to spin much faster given that the atmospheric pressure is way below 1 PSI, while Earth's is about 15 PSI. This leads to more battery usage, and since Mars is also farther away from the sun, you get less solar energy from the solar cells. There are also no people on Mars obviously, as of 2021, so we will not look into a Mars variant of the Lupus Drones until there are civilizations on Mars.
More Lupus Drone Testing to come soon, stay tuned!