Moments ago, Starship SN10 attempted a flight to 10km, to then orient itself into a unique horizontal bellyflop position, flip itself upright after it has descended to about 1km, deploy the landing legs, and touch down on the landing pad softly.
This vehicle, Starship Number 10, uses Liquid CH4 (methane) and Liquid Oxygen aka LOX/LO2, used by its 3 powerful Raptor engines.
Today, SpaceX started their official stream for the Starship SN10 Flight. SpaceX have privated the stream replay, so we cannot replay it. In case you want the link: https://www.youtube.com/watch?v=DDEgFsefrGw&t=541s
The vehicle began fueling up with Methane and LOX, and then shortly after, it started the engine chill process, which is the process of chilling the engines down in preparation for engine ignition, so the engine material does not crack or get damaged from sudden shock. 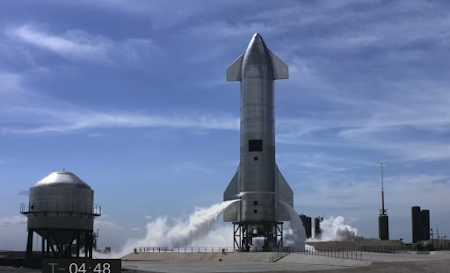 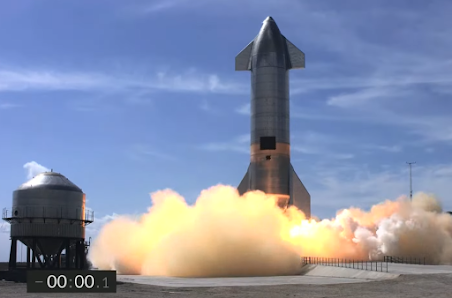 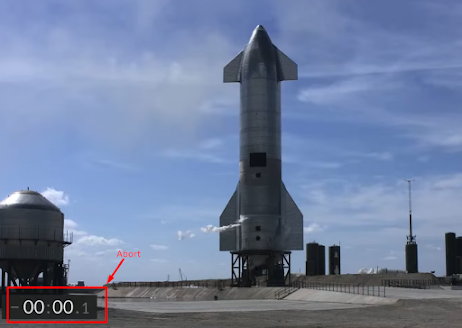 The reason for this abort was due to a  slightly conservative high thrust limit on one or more of the 3 Raptor engines in the skirt of Starship. Here is the tweet Elon Musk posted just after the launch abort. 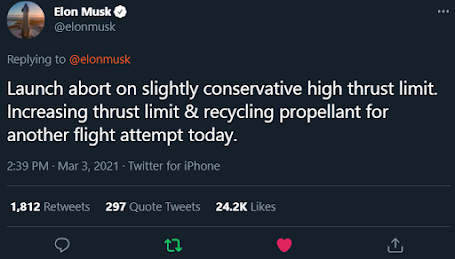 According to Elon Musk, CEO, Chief Engineer, and Chief Designer of SpaceX, and SpaceX Engineer John Insprucker, they will be making another Starship Flight Attempt this afternoon, and we can expect another official SpaceX Stream. If you would like to watch for the stream to appear within the next hour and a half, refer to this link and refresh this page often until you see the SN10 Livestream. https://www.youtube.com/channel/UCtI0Hodo5o5dUb67FeUjDeA. You can also watch a 24/7 live feed here: https://www.youtube.com/watch?v=sTA0GTgFn5E.
The problem that caused Starship SN8, the Starship that flew in December 2020 which exploded due to a pretty hard touchdown, was solved. It was a pressure issue with the liquid methane header tank, a tank with reserved propellant only to be used during landing. The issue with the latest Starship that launched, earlier last month, Starship SN9, was solved in a way. One of the 2 engines that were supposed to reignite did not reignite, causing the rocket to lack control authority, and have a hard touchdown.
The solution that was implemented was instead of relighting just 2 Raptor Engines, from now on, they will reignite/relight all 3 Sea level raptor engines, and shut down the one with the worst performance less than 2 seconds after reignition, allowing the 2 Raptors left to do the landing flip maneuver and final landing burn. As the diagram shows below.
Hopefully, all goes well with Starship SN10, and we are awaiting another launch attempt today. Keep updated with SpaceX's socials, like their Twitter, to see when they are about to go for another flight attempt. https://twitter.com/SpaceX