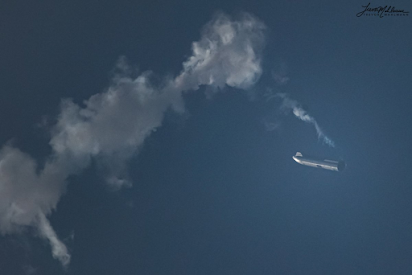 Image credit goes to Trevor Mahlmann. This is an image of Starship SN11, performing the bellyflop maneuver to descend back to the landing zone. It does this bellyflop maneuver to maximize drag & slow the vehicle down as much as possible without spending propellant on it, and simply using the atmosphere as a brake.

During today's test, early in the morning, the vehicle began fueling up & chilling down its 3 methane-oxygen closed-cycle raptor engines in preparation for ignition. This test was taking place in Boca Chica, Cameron Country, Texas, or as Elon Musk & SpaceX calls it, Starbase. We prefer Boca Chica, or Starbase Boca Chica.

The rocket successfully lifted off at the targeted T-0 Time. T - 0 is the exact time that the rocket engines start up & the rocket lifts off. 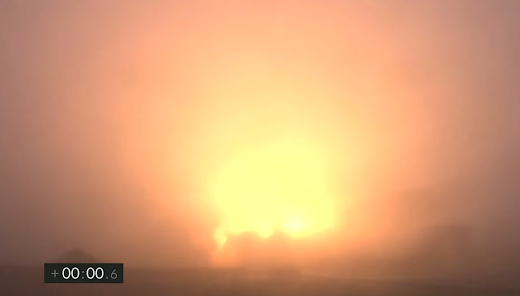 That is not an explosion, that is the rocket lifting off. It is very foggy so you cannot tell. The rocket was intended to launch to an apogee (highest point) of 10 kilometers. 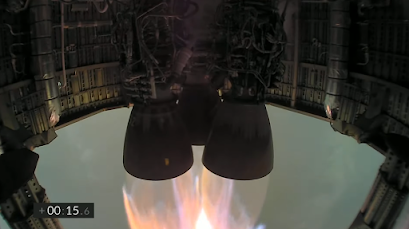 Above is an image of 3 Raptor engines fueled by Methane and Oxygen burning. Remember the phrase, Engine 2, that is the engine on the far left. All of these raptor engines can gimbal (wiggle/turn) up to about 15 degrees in angle. The vehicle shut down its engines 1 by one in a sequence. At a certain altitude one shut down, at another altitude, another one shut down, and right at apogee (highest point) it will hover with its last 1 engine and then flip itself into a horizontal bellyflop position as mentioned before, followed by the last engine shutting down.
The rocket descended until around T + 5:50 followed by it relighting its engines to flip itself to a vertical position to then deploy the landing legs and land. That was what was SUPPOSED to happen.
According to SpaceX CEO and Chief Engineer, Elon Musk, during engine relight to flip the vehicle vertical, one of the Raptor engines (engine number 2/engine 2) did not achieve operating chamber pressure, meaning this could be a tank pressure issue. There might not have been enough pressure in the landing (header) propellant tanks, leading to not enough fuel combusting in the combustion chamber, leading to a chamber pressure not being high enough (not operational pressures). This lead to a lack of thrust & likely some other issues.
After the landing burn/engine relight, Elon Musk says something significant happened, but they are not fully sure what happened yet and are looking into it.
This vehicle was Starship SN11/Serial Number 11, and since it has blown up, they will be rolling out another Starship to the launchpad in a few days time (Starship SN15), 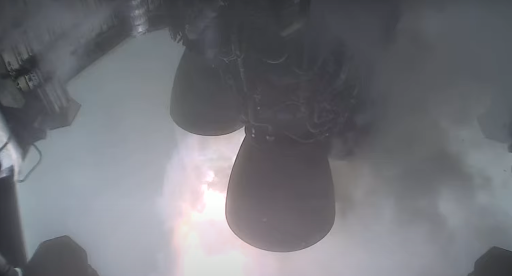 Above is an image of the last frame from Starship SN11 during engine relight, from what is visible, only one engine relit, specifically the one that was having issues. During ascent & landing. This likely triggered the flight termination system (FTS) to explode the vehicle mid-air so the rocket wouldn't splat on the ground in one piece and damage equipment but instead would explode mid-air to allow debris to fall down to the launch site with slower velocity.
Watch the Livestream replay for SN11 here -- https://www.youtube.com/watch?v=gjCSJIAKEPM
Watch the Livestream replay for SN10 here -- https://www.youtube.com/watch?v=ODY6JWzS8WU