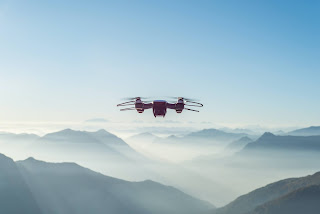 Phobos Aerospace & Swivro are developing satellites that operate within Earth's Atmosphere, hovering at around 55,000 ft with 4 propellers, basically a drone. We have not yet flown any of these drones yet. But the first few tests will consist of a smaller scale version of the eventual design, and will practice hovering at low altitudes, as well as testing a bluetooth connection from a phone to the drone to get internet access via bluetooth. There is no scheduled date for the first test, but it will be coming up soon. The drone propellers & drone structure will eventually be 3d printed out of transparent-ish resin with small motors to spin the propellers & control throttle. 4 propellers will be used, likely always, for enough power & control authority.

The satellites will be able to hover themselves in the sky on their own battery power for only 10 minutes with their standard battery. To solve this, more batteries will be added until the drone is nearly at its maximum weight capacity, and will use solar panels to charge them all to 100% during the daytime. So during night time, the drone will slightly lower its altitude to use less power & spin slower, and live off of the electric charge from the batteries which were charged by the solar panels during the daytime. If anything were to go wrong and the drone were to suddenly fall from the sky, a lightweight parachute is inside the middle top of the drone that can be deployed when the drone starts falling, letting the parachute have a very soft touchdown.

If all of the drones' batteries percentage combine would be detected as below 20% or lower, the drone can hover down to a charging station, autonomously land, charge wirelessly by landing on top of a charging pad, and one charged back up at least to 75%, the drone can then autonomously fly back up, and repeat only if necessary, but by the time it reaches 20% battery again, the sun will be out, so it can recharge mid air via on board lightweight solar panels. Designs & videos for these drones will be released soon. Thanks for reading!

This article was originally published on our sister company, Phobos Aerospace, here: