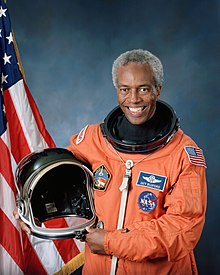 Guion Bluford was the first black American astronaut. He was also a fighter pilot and engineer, like lots of other astronauts. He had spent 28 days, 16 hours, and 33 minutes in space. He flew on 4 space shuttle missions, STS-8, STS-39, STS-61-A, and STS-53, which are all Space Shuttle Challenger, and Space Shuttle Discovery. Guion Bluford had received a degree in Aerospace Engineering.
When Bluford was selected to become a NASA Astronaut to go to space in the year 1978, he had shortly after, begin training, which lasted about 1 year. In August 1979, Bluford was officially an astronaut. Bluford later retired.
He had received countless awards for many different things. Bluford's last mission was STS-53, which launched from Kennedy Space Center on December 2, 1992. The crew of five deployed the classified Department of Defense payload DOD-1 and then performed several Military-Man-in-Space and NASA experiments. After completing 115 orbits of the Earth in 175 hours, Discovery landed at Edwards Air Force Base on December 9, 1992.
Bluford wasn't just an astronaut, he also was Vice President/General Manager, Engineering Services Division of NYMA, Greenbelt, Maryland, and more.
Here is a picture of Bluford aboard Space Shuttle Discovery, floating around in microgravity.