Why don't we all use solar panels if they are clean? 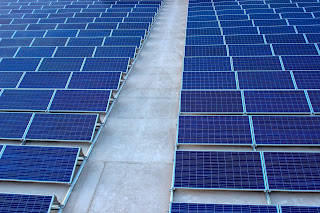 Solar panels, yeah sure, they are clean, but you may not know how inefficient they are. These pros and cons listed below will let you know almost everything about solar panels and will let you decide whether it is worth it or not.
Pros:
Works in almost any climate:
Solar panels work in many different climates, which is why they are also used in space, most noticeably, on the International Space Station, being pretty much its main source of electrical power. Solar panels are great in space, but not so great down here on Earth in our atmosphere - more on that later.
Long lifespan:
Solar panels have a long lifespan, so you don't have to often replace your solar panels, which is usually not so cheap. This is definitely a plus, as they also do not require maintenance all the time, making all your solar panels easier to manage, saving lots of time. This also does depend upon the solar panel brand you are using, but for something like Tesla's solar panels, they do indeed require minimal maintenance.
Clean Energy:
Solar panels are 100% clean, leaving behind/emitting no carbon dioxide at all from anywhere, which helps stop pollution and goes towards a worldwide goal of using pure renewable energy. This does not apply to how the solar panels are made, but applies to when the solar panels are running and collecting energy.
Cons:
They don't work at night:
Solar panels do not work at night, obviously, because there is no sun to collect energy from. This wastes a lot of energy, and you will end up having to have the solar panels charge a battery during the day, to then get electricity from that battery at night, and that ends up costing a whole lot more than you expected.
Inefficient:
Solar panels don't generate nearly as much energy as the average person would think, you would need to cover over 2 giant mountains in solar panels to get a small fraction of the energy a nuclear reactor produces. That wastes a LOT of space, and you would be better off using 1 nuclear reactor underground far away than covering multiple giant public mountains in blue solar panels. Earth's Atmosphere also blocks the majority of energy coming through, so that is a reason why solar panels are weak, and why they are used in space. Space doesn't have an atmosphere, so there is nothing to block the pure energy coming towards the solar panels.
Weather Dependant:
If there are a small number of clouds in the sky above the solar panels or in the direction the solar panels are facing, you lose a lot of energy that you would get if there were no clouds. If there is a light thunderstorm, meaning a lot of clouds above your house with no peak to the blue sky, you suddenly start generating barely any electricity with your solar panels. If the weather isn't good, then you lose energy.
____
So, the conclusion is, solar panels do basically generate you electricity for a long time with minimal maintenance, but with weather issues, getting only small amounts of electricity, and them only working in the daytime, it seems to not be worth it, AT THE MOMENT. Big companies like Tesla are working on improving this, and they are doing good jobs in numerous ways, but until solar is nearly as good as nuclear, it's not 100% worth it.