The big SLS hot fire, what is it all about? 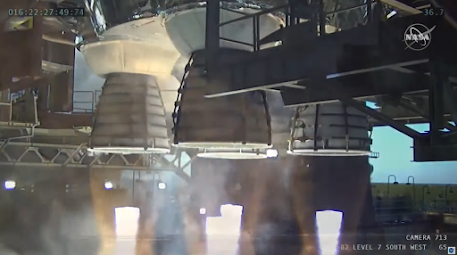 NASA is creating the Space Launch System, which will be the most powerful rocket that they have ever created. The Space Launch System first stage consists of 4 main RS-25 engines that run on Hydrogen and Oxygen and 2 additional solid rocket boosters. Today, January 16th, 2021, they will be testing the core stage, which is the first stage with the 4 RS-25 Engines. This does not include the solid rocket boosters, as they have already been tested.
The reason this hot fire test is so exciting, if all goes well, this same core stage will launch the Orion Capsule to the Moon later this year in November, and will also prove that the core stage performs flawlessly, so this also matters for future SLS missions. SLS is part of the NASA Artemis Program, which is Apollo’s sister in Greek mythology, and Apollo was the previous NASA program that also had a goal of sending humans to the moon. (if you didn’t know, Artemis’ goal is to send many humans to the moon over a long period of time.)
You will be able to watch this hot fire test via NASA’s live scheduled YouTube Stream. Click here to be redirected to the stream.
Hopefully all goes to plan, we are wishing the best of luck to NASA. Go NASA!