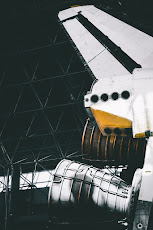 Can I move in space?
No matter how much you move in space with your arms or legs, nothing will happen, you simply won't go anywhere. You need to create force by pushing something out of an end, usually by converting thermal energy to kinetic energy.
How do rockets move in space?
Rockets ignite a mixture of a fuel and an oxidizer in space in a rocket engines combustion chamber, and have it shoot out the nozzle at supersonic speeds, resulting in thrust being produce. Any rocket that lifts off from Earth uses this method, no matter if the rocket uses solid fuel, liquid fuel, or uses hybrid fuel. When you burn fuel, energy is released. On Earth, there is oxygen, a lot of it, so if you use a rocket engine on Earth, you don't necessarily always need an oxidizer mixed with your fuel since Earth already has so much oxygen in the air. In space, there is no oxygen, so to burn fuel, you can bring your own oxidizer, usually liquid oxygen. Liquid Oxygen is more dense than gaseous oxygen, so you can store more of it, which is why rockets like SpaceX's Starship, Falcon 9, and why ULA's Delta and Atlas rockets use Liquid Oxygen, aka LOX/LO2.
This seems complicated, is this the only way to move stuff around in space?
No, there are other methods of propulsion in space. There is something called an Ion Thruster, which generates thrust electronically. It creates thrust by accelerating ions by using electricity. It ionizes a neutral gas like Krypton or Xenon, by extracting electrons out of atoms, creating a cloud of positive ions. This isn't the only alternative method, you can use a cold-gas thruster, which is basically highly compressed gaseous nitrogen, helium, or oxygen, which is shot out of a tube or miniature combustion chamber. It's basically a large fire extinguisher, except it is way more compressed therefore being under more pressure, and doesn't have CO2 inside. Nitrogen is used for cold-gas thrusters because it is cheap, as it makes up over 70% of our atmosphere, and Helium is used because of how insanely light and "un dense" it is. These are called cold-gas thrusters, because the gas isn't hot. Hot gas thrusters are usually used in RCS/Reaction Control Systems, which use Hypergolic fuels. It's just like a cold-gas thruster, except hot, and contains a fuel and oxidizer. These act quick because the fuel and oxidizers are hypergolic, therefore combusting apon contact. You can also use a reaction wheel, which is a high-velocity spinning wheel to turn a spacecraft another way, but it does not produce any thrust, at least not any significant thrust.
Okay, sounds good, but which propulsion method is the best and most efficient?
It depends what you are using it for. If you are using a series of tiny  thrusters to re orient your spacecraft in another direction, cold-gas thrusters are they way to go. They are cheap and fast, but a lot of cold gas thrusters eat through their fuel quickly. If you are creating a rocket engine to propel a spacecraft really fast, liquid fuel is the way to go, as you can throttle it and shut it down when needed, and you have a big amount of options for which fuel you want to use, including Kerolox (kerosene + liquid oxygen), Hydrolox (hydrogen + liquid oxygen), Methalox (methane + liquid oxygen), and much more, including hypergolic fuels like Hydrazine and Dinitrogen Tetroxide. Rocket engines use different cycles, so this can alter the amount of thrust it produces, but that will be talked about in a future Swivro Blog Post. Thanks for reading!