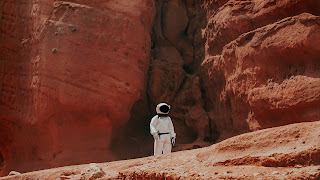 Yes, humans can colonize Mars, but there are some issues that we would need to get around. Let's say you launch a rocket into earth-orbit, then from there, fired your engines to put yourself on a trajectory to rendezvous with Mars sometime within the next few months. Sure, you can arrive at Mars, and land, as long as you have a heat shield to survive atmospheric entry and engines that you can start up to touch down safely, but you need a way to get back to Earth, and you also need a way to communicate with Earth.

Mars orbits farther away from the Sun than Earth does, so the 2 planets' orbits are not in sync. Mars orbits slower than Earth, so at one point, Mars and Earth will be exactly horizontal from each other, like this image below.

The sun is now in between Earth and Mars, so you don't really have a way to communicate, as our huge star, The Sun, is right in the way for our antennas on Mars to communicate with ground stations or satellites on or around Earth. This means, if there is a leak in your station on Mars, well, you can't tell anyone about it besides your Martian friends. You can fix this with a deep-space/interplanetary satellite network, consisting of thousands of satellites orbiting the sun, all at different orbits to have communication with Earth no matter where you are in the solar system. You send data to one satellite, then it goes to the next one, all the way around the sun until when the last satellite receives the data, it sends it directly to Earth, then, the people on Earth receive the data. There is also a problem with this, #1 it will take some time to get the data all the way to Earth, unless we invent some new method of transferring this data, and #2, it is pretty unreliable, if one satellite misreads data, you will be pointlessly sending faulty data across thousands of satellites just to get the useless data to Earth, without you even knowing anything went wrong.

Ok, that is the first problem, the second problem is, when you land on Mars, you used up your fuel to get in Earth Orbit, put yourself on a trajectory to intercept Mars, and then to land on Mars. You have no fuel left now, and you are basically stuck on Mars. Yeah, that sucks. There is a solution to this, you can use Mars' atmosphere and surface to get Liquid Oxygen and Liquid Methane, a perfect rocket fuel mixture, but you cant steal all of Mars' resources forever, you need a more reliable source, at least until you steal everything from Mars.

We, humans, have experience with sending stuff to mars, we have sent multiple rovers, including the perseverance Mars Rover that was launched just recently launched last year (it is currently 2021), and as of January 31st, 2021, the perseverance rover will be touching down on Mars in under a month. We could do the same thing, except instead of a rover being on top of the rocket as the payload, it can be a human-rated space vessel. SpaceX is working on its Starship Rocket a lot, which its goal is to land humans on Mars. They plan on making Liquid Methane and Liquid Oxygen from Mars to use as rocket fuel to return to Earth, but it is unclear how they will communicate with the people on Mars when The Sun is directly in between Mars and Earth. So far, it looks like they are progressing fast, setting us on a track to reach Mars sometime in 2023-2026. Maybe they will use their fast progressing laser-powered Starlink Satellites to communicate with Earth. With the current rate SpaceX is progressing, you will be able to go to Mars in your lifetime, not just once, but multiple times to Mars and back to Earth.