Boeing Space, there are so many delays and issues. 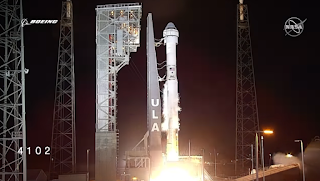 Recently Boeing Space (and Boeing) have been under a lot of hate by fans of spaceflight.

The reason that they have been receiving hate boils down to a few reasons, the main reason is; slow progress on the NASA SLS Rocket (Space Launch System) and the Starliner capsule.

The main focus of this post is the Starliner capsule, so we will not be going into much detail about the SLS.

The Boeing Space Starliner Capsule has been delayed for over 3 years at this point, and soon maybe 4, originally targeting 2018 for its first crewed test flight. It has since only executed one un-crewed test flight that was only considered a partial success since a clock failure caused the vehicle to burn through massive amounts of RCS fuel, because without its clock it did not know which way it was pointing. The mission ultimately was barred from rendezvousing with the International Space Station due to these failures.

With these kinds of delays, it really puts into question why NASA is still agreeing to pay Boeing twice as much as the other company selected for the Commercial Crew Contract (SpaceX and the Crew Dragon 2 Capsule). Yes, that’s right. The vehicle that has flown humans flawlessly to the ISS twice, has had a flawless uncrewed and crewed rendezvous demonstration with the International Space Station, and has demonstrated a flawless and safe in flight abort test if anything were to go wrong, is getting paid about half the price, that Boeing, the company that can’t seem to get their capsule into a stable orbit without issues, is. Why? No reason.

It takes more pressure off NASA to outsource crew and cargo transport for the International Space Station to private companies like Boeing, SpaceX, Northrup Grumman, and more, as NASA currently does not have an operational launch vehicle capable of resupplying the space station with crew and cargo.

By doing this, it means that other programs can have more resources focused on helping take NASA's goals of space exploration even further than they could if they were having to develop vehicles for the International Space Station.

As mentioned before, Boeing Space has received just over twice as much money for the Starliner Capsule despite a seat costing 90 million USD (In 2021 dollars) per seat compared to the Crew Dragon 2's 45 million USD per seat. Yes, its crazy. Again, why?, no reason. “Boeing is more experienced”, does not count as a reason, as SpaceX has simply disproven that.

Boeing Space has been shown as quite negligent when it comes to flight software. In the un-crewed test flight of the Starliner, they had to check over 2 million lines of code due to a failure in the spacecraft's clock.

Speaking of the clock, they use a clock to determine the attitude of the spacecraft based on the T+ of the mission, not using math or star tracking, this is a very flawed system as shown by the first un-crewed test flight of the Starliner in which a clock failure completely stopped the Starliner from gong to the International Space Station. Another safety flaw is a lack of testing of very trivial systems, for example, they did not test the Service Module separation RCS firings, had they not checked them because of the failure in the clock, the service module would have crashed into the capsule damaging the heatshield and dooming the mission for the crew and the capsule.

So, after we have laid out all of this information and listed these pros and cons, we can say that everything Boeing Space has ever done is full of delays, high costs, negligent safety practices, and the exploitation of cost-plus contracting. Boeing, you need to get your stuff together or else things don’t look too good for you.

This blog post was made by a Swivro Contributor, named Delta. Thanks Delta!