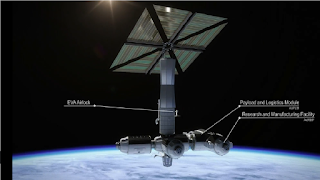 A private company called Axiom Space is creating a privately funded commercial space station, that will be attached/docked with the International Space Station, but eventually out as its own separate commercial space station. Commercial crew members will be able to purchase a ride on a spacecraft like SpaceX's Crew Dragon, Boeing's Starliner, and more vehicles.
This commercial space station is great, because it is making access to space easier and cheaper, getting one step closer to the ultimate goal for space enthusiasts, a space fairing civilization. One ride to this space station will cost $55 million dolars for all the crew, so if you have 4 crew members, each one would pay $13.75 million dollars.
This space station definitely isn't a good idea, but it isn't the best. For people that will be on this space station for a long stay, they will receive higher amounts of radiation than usual, which could be harmful. You can partially fix this by having some material in the walls that absorbs significant amounts of radiation; like water. But, there is indeed no plan to add anything like this to the Axiom Space Station, which is a hazard. Although you aren't on Earth, you aren't completely out of the atmosphere while in low earth orbit (that's where the Axiom Station will orbit), meaning you aren't receiving an INSANE amount of radiation, as Earth's atmosphere is still protecting you, just not as much, so you don't need too much protection.
There have also been talks of future commercial space stations, that will be interplantery to travel to planets like Mars, to even Neptune, but that would require several precautions like powerful solar panels, water in the walls and very thick aluminum in the walls to protect against radiation, and more. You would also need a type of fuel to last the entire journey, and cryogenics are definitely not an option, so you would need to go with room temperature hypergolic fuels. Speaking of room temperature, you would also need to get radiator panels to keep the station at a good temperature.
Anyways, lots of people are excited for the Axiom Space Station to be completed, including me, but until it actually is fully built; it could be cancelled, delayed a lot, have lots of issues, or more. If you go to YouTube and search Axiom Space Station, you will see animations of what the space station will look like.