AI is rapidly improving, and here is proof. 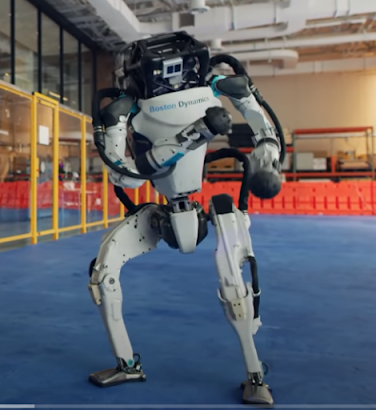 Image Credit: Boston Dynamics
You probably hear a lot about AI, everyone does. AI is a bigger problem and/or threat than the average person thinks it is. If you thought Siri, Bixby, Google Assistant, or Cortona was smart AI, you clearly haven't seen Boston Dynamics' literal dancing robot. Check it out here: https://www.youtube.com/watch?v=fn3KWM1kuAw
The fact that the robot can move this human-like, can jump, and can do all of these quick actions, and dance in perfect sync with other robot "friends", is just crazy. If you make a "human suit" that looks realistic, and figure out how to put it on this robot and have the suit move with the robot, you almost wont be able to tell that it is a robot and not a human. I wouldn't go anywhere near this robot when its turned on, or even "off", would you?
We mentioned in a previous Blog Post that there are 2 types of AI, one is dangerous and one is not, and based on what this robot in the video shown above is doing, this is the dangerous type. The "dangerous" type of AI is the type of AI that learns things on its own, and can perform its own tasked that it learned without the help from biological humans. This is dangerous because a robot can learn how to use a gun, and start shooting humans. Yes it sounds bad, but it is the truth and could happen any day at any time.
The other type of AI is a type of AI that is programmed by humans, to only perform certain tasks under certain limits and cannot improve upon itself, unless a human changes the code for the AI. The Boston Dynamics Robot shown at the top of this Blog Post in the YouTube link learned how to dance and do all of those tricks, and sync with the other robots dancing on their own, without humans' help. The only things the humans do is tell the robots when to dance and when to stop dancing.
This isn't the only robot that Boston Dynamics operates, they have another robot dog that can walk on its own, open doors and open shelves on its own, stop when something is in the way, then proceed to walk afterwards. This is also the dangerous type of AI, since it learns things on its own and performs its own tasks that it learned on its own.
If AI does not stop improving rapidly this frequently, then eventually AI will learn to be 100% smarter than humans, and take over Earth.